I didn't see a topic on this and wanted to bring it up.

Does anybody else out enjoy video game music as much as I do. My favorite music is from the Mario series and Banjo-kazooie. I love the music of Koji Kondo, who composed the music for most of the early mario games. My favorite music is from Super Mario 64 and other mario games because I the jazz elements found in Koji Kondo's compositions. Here's my favorite video on youtube of Hop Hop Donut Lifts from Super Mario World 2: Yoshi's Island.

What are your guys' favorite video game tunes? 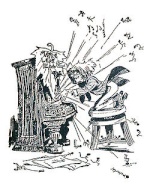 Mario bros music is epic! (look at this guy https://www.youtube.com/watch?v=Vin9sapwkRU) But to be honest, in my opinions, recent games don't focus that much on music, as long as it fits and sound ok it's used. At least that's how it feels for me, so I don't fave many game tunes, and right now I can't think of any :S frankly this is freaky! Where did the musical art go?

Yeah, I know what you mean about video games nowadays

BTW, I have seen that video you linked and that guy is really cool! (I've only been playing for a month now so I am so jealous

) However I do think that the music in the Halo series is excellent and really matches the moods and emotions of the games. Also I've never personally played New Super Mario Bros. for the DS, but I love the music- very jazzy. I've never played the Final Fantasy 6, but I love the Spinach Rag. Very well done ragtime piece. Check out these two videos:

Well you shouldn't be jealous, you don't know, maybe you're better than he was during his first months.

Personally, there have almost allways been a keyboard at home, so I don't know when I "started" playing. I could play with one hand until... three, four years ago when my piano skills would decide my final grade for the arts class, then I sat down and learned "Don't speak" by Gwen Stephanie (?) with both hands. After that, I've had time to polish my piano skills only during one summer, but I've tried to learn new tunes every now and then (since I play by ear it's difficult to learn a whole piece, everything I play is like half completed

). So I'm still kind of a beginner

Wow I youtubed Halo music, and I really like it

you can listen to the music alone without getting annoyed (as opposed to many games where I simply mute the sound). Halo has been on my to buy-list like forever, but lately I don't enjoy playing as much as I did before (unfortunately). Maybe it's time to get back on tracks.

what I didn't expect was FF to have such music style o.O I'm not really a big fan of FF, but all the "FF-propaganda" is about high resulotion machinima and heavy rollplaying and stuff. Frankly, this particular tune wasn't very impressive to me, it sounded as though other instruments were missing and incomplete (lol obviously in the vid you posted, other instruments WERE missing, but I youtubed the original too

). As a whole it was... ok. Maybe a little more flow and low-sounded instruments or a stronger drum sound... maybe.

Who is online?
In total there is 1 user online :: 0 Registered, 0 Hidden and 1 Guest