I am 52 and it has taken me 52 years to get here! Andrew, you are awesome and thanks for your altruistic attitude. I wanted to write my story because perhaps I might be able to make a small contribution in helping the yonger generation. I am from Brazil and always wanted to play a musical instrument; but as a child, I didn't have a real family and the means to get a musical education. Junior High and High School in Brazil didn't offer students the opportunity to learn a musical instrument like it does in the US. Nonetheless, I always dreamed that one day I would have the opportunity to learn music. One day, I decided to learn English. That was one of the most important things I've done. Years later, I dared to attend university in the United States and to make a long story short, after much work, I was accepted and eventually graduated from Brigham young University in Utah.
When my first child was about five years old, I started taking her to a Yamaha music training for children. As she was learning the keyboad, I was learning it with her. Then, two years later when my boy was five, I started taking him to the same Music School as well. I kept taking my children to music lessons for years. Eventually, I bought a piano. Since I got the new piano, I've always practiced consistenly. I would come from work everyday and practice for an hour. When my son started Junior high, I asked if he wanted to play the slide trombone. He said he wanted to, but quit it a year later since he is more into guitar and basketball. Well, I decided then to learn the trombone. I fell in love with the slide trombone and I have been practicing for almost six years now. I practice for two hours everyday.
I think if I had had the opportunity to be involved with music when I was a child, I would have become a great musician; nonetheless, I cannot change the past. But, it is never too late to learn.

Success is an outcome of personal effort and responsibility.

Good Luck in the future, never to late to get a breakthrough

It seems that you have a Great Musical background ..
Wish you the Best ..

btw, I Love the trombone

wow
what a great story 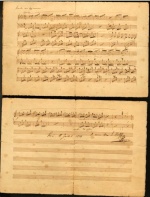 I was really happy to hear your story, your last statement was correct, success is simply the amount of effort and drive you give yourself to achieve the goal you've given yourself.

hope to see you around

I loved how you gave the chance for your kids to learn what you missed when you were a kid.
This story is a great example for all of us that with diligence, every day practice you can achieve your dreams... thanks for sharing it with us.
Just like others said it is never too late to start something you would like to learn.
An hour practice every day is awesome, help so much - that always reminds me I need to practice a lot more than I usually do

Who is online?
In total there are 4 users online :: 0 Registered, 0 Hidden and 4 Guests