One thing that I quite don't understand is that
When we play songs we look at the score to identify which key to play
So, what is the functions of major scales?

Forgive me for such silly question.
Thanks. 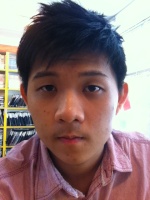 Hmm, at which music theory lesson are you right now? I think Andrew explains that somewhat in one of the theory videos.
Anyways, scales consist of specific interval patterns, for example T, T, ST, T, T, T, ST (where T stands for tone and ST for semitone). The example I've shown you is how the major scales are built. The C Major Scale is thus C, D, E, F, G, A, B, C.
Many compositions are in major or minor scales (natural minor (it is also called aeolian mode), harmonic minor or melodic minor). The major scales are often thought of as happy and minor scales as sad. However there are TONS of different scales. I know the interval patterns for the major scales, natural minor scales, harmonic minor scales, melodic minor scales, harmonic major scales, whole tone scales, chromatic scales, blues scales, pentatonic scales, minor pentatonic scales and church modes (ionian (same as major scales), dorian, phrygian, lydian, mixolydian, aeolian (same as natural minor scales) and locrian scales). However there are many more scales such as Oriental, Egyptian, Japanese or Hungarian Minor. You can download the "Music Scales" software from here to check out a few scales:
http://www.hyteq.com/
I think there's a more complete list of scales here:
http://www.musikipedia.se/skalafinnaren


It's in Swedish but you can just check how many scales there are if you want. "Vanliga skalor" means Usual scales and "Andra skalor" means Other scales.

Anyways, compsitions often consist of one type of scale, for example a composition might consist of major scales. Often there's a basic tonality, for example C Major and there are some modulations (key changes), for example the key can change from C to G but it's still a major scale. Compisitions often start and end with the same key, for example a C Major composition will often start with C and (almost) always end on C. Of course there are exceptions like with everything else in music. I hope it helps somewhat. I'm sure you will get a better idea once you watch more music theory videos and do your homework

I stopped at MUSIC THEORY #23 because I was getting confuse

(
I will be getting my very first digital piano this month so I switched to HOW TO PLAY PIANO lessons because I think I will need to have some ideas on what to practice so that I will not lost direction that do not know what can I do with the piano.

Still I need some advices =(
I really scare that I couldn't do anything with the piano.

Well don't worry about it. 23 is almost half way through the whole course so that's very nice. Well, have you done all the homework for the previous music theory videos? If not, go ahead and do it, you should get less confused then. If you don't understand something/s maybe you should re-watch the music theory videos, even several times if needed. Personally, I'm going to repeat level 1 and level 2 by watching all the videos and taking a few notes. I'm at lesson 39 or something like that atm.

Anyways, as for directions for playing piano, I understand what you mean, it's hard to know what to do next. I recommend that you read at least sections I and II of chapter 1 in the Fundamentals of Piano Practice so you get an idea of how to practice. You can ofc watch a few (maybe 5 or something) of Andrew's How to Learn Piano videos. Ofc it depends on how much time you have. Well, feel free to ask about things whenever you are in doubt.

I skipped some homeworks

I think for this moment I will stop by 23 and try to refresh it by watching Piano lessons because I find some similarities between both lessons. I've been copying down most of the important notes from the very beginning videos, there is another question that I was thinking is that,
when reading sheets, we only read by intervals? because in the vid Andrew said that to read fast we must read by intervals. Hmm.. I confuse abt the reading Keys and Intervals method.

Yeah... gradually I find that it is important to read the Fundamentals of Piano Practice, at the beginning when I was first recommended to read that I was like.. Oh.. full of words. Till few days ago I simply looked up the index and pressed one of the topic, its far better than I first thought.

In this case, I think I will start off by reading it by now until I get better ideas about the directions.

Thanks a lot, Rickard.

Well, I mostly use the find key method rather than figuring out the intervals. I think reading intervals might be faster but I suppose it's good to become good at both. Anyways, I'm not a great sight reader

hmm.. Im currently at about pg100
but feel like that is more for people who ady know how to play piano

You will find it useful once you start playing the piano. Don't worry about if it sounds complicated right now.

Hmm.. Okay
But what normally people should ady know if they are at Grade 1?

At grade 1 you should start with learning theory? It doesnt matter where you start, but I guess, chords, chord progression, scales, how to read a sheet are a good start. You've already watched alot of Andrews videos, and they explain what you need to get started. And maybe what makes different genres different. Reading about how music is built, that way you'll have more understanding of how music works.